How the Escapement Works

When energy is stored in the mainspring, by winding, the train wheels begin to turn. This energy is carried from the barrel through the center, to the third and fourth wheels, and finally to the escape wheel, turning the wheel in the direction of the arrow shown in fig 1. 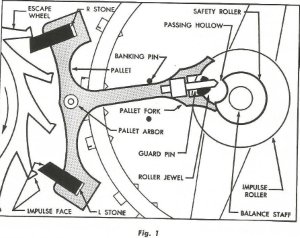 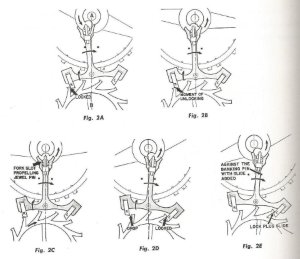 As the balance wheel swings, the jewel pin is carried back and forth across the center line of the escape wheel, pallet, and balance wheel (shown in line AB in Fig. 2A).

As the jewel pin approaches the center line and is in position (shown in Fig. 2A), it enters and strikes the inside wall of the fork slot.

During the passage of the jewel pin over the center line, the fork is moved in the direction of the arrow (Fig. 2B), causing the R pallet stone to unlock an escape wheel tooth. At the instant of unlocking, the escape wheel tooth is released, which creates an impulse on the R pallet stone. This impulse,  beginning at the instant of unlocking, forces the pallet stone out of the path of the tooth (Fig 2C). Instead of the jewel pin driving the fork, as was the case in the unlocking period, the fork imparts a propelling force against the jewel pin. This impulse action supplies the energy to maintain the balance wheel in motion. After the escape wheel tooth slides off the pallet stone, it travels a short distance, known as a drop, until another tooth locks on the opposite pallet stone (Fig 2D). The pallet is caused to move slightly farther than the locking point because of the draw. Draw may be described as a force which tends to hold the pallet against the banking pin. This is the result of the force exerted by the escape wheel tooth on the locking face of the pallet stone. The amount of additional movement of the stone on the tooth is called slide (Fig. 2E). The balance wheel turns until the energy stored in it from the impulse is overcome by the tension of the hairspring, pivot friction and air resistance.

The space between the inside corners of the pallet fork and the front and
back of the roller jewel at the instant of “drop.”

Called fork horn clearance. This is the clearance for the roller jewel
in passing out and past the fork horns. 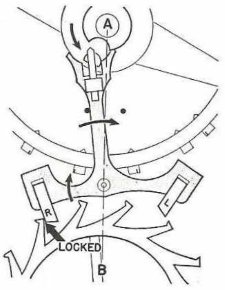 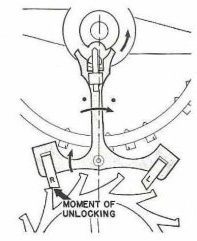 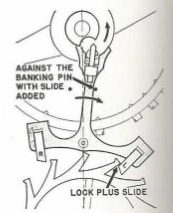