The Little Engine That Could

Hans asked me a while ago to do a write up on the ETA 2892. Both because of its enormous popularity, and also the fact that it is deemed accurate and reliable enough to be used as a base movement for many high-end manufacturers’ complications.

There’s not much I can add to Walt Odets’ history and evolution of the movement itself, except to say that most changes and updates were done in order to improve the efficiency of the automatic winding.

The first problem arose because originally the basic movement beat at a leisurely 18,000 beats per hour (BPH) and had a fairly large diameter balance wheel. When ETA upgraded the movement by increasing the beat to 28,800 BPH, this required a much stronger mainspring than what was used previously. This required upgrading the automatic unit by improving it’s winding efficiency in order to deal with the extra resistance due to the stronger mainspring.

No sooner had the above problem been adequately dealt with, when ETA gave themselves more winding efficiency headaches by reducing the diameter of the movement from 28mm to 25.6mm so that it could be used in a wider range of cases. Hence the change in model number from 2890 to 2892. Thickness remained unchanged, measuring 3.6mm for both models. This had the effect of reducing both the diameter and mass of the oscillating weight. A problem that was finally put to rest with modifications that resulted in the latest model, 2892/A2.

For the more technically minded, the final modifications to the automatic winding was to reduce the chamfer around the circumference of the oscillating weight – thereby increasing it’s mass – and to switch the stud and the jewel, which supported the intermediate reduction wheel. This wheel, which drives the ratchet driving wheel, originally had a stud, but now has a jewel. The stud has now replaced the jewel in the upper part of the automatic winding bridge. This resulted in less winding friction due to this wheels much greater stability. Omega (and Girard Perregaux) have increased the winding efficiency further by reducing the diameter of the ball bearing support.

I have ‘dissected’ a Bulgari labeled Girard Perregaux modified 2892 for you. So let’s take a closer look at it starting with its source of power, the mainspring. While not being very high, this is quite a strong mainspring and provides the movement with a more than adequate supply of torque. The barrel arbor has a small diameter relative to the size of the barrel. This is in keeping with most modern movements that use fairly long mainsprings. This results in the mainspring taking up about 75% of the available space, as opposed to older movements whose mainsprings only utilized about 50% of it. 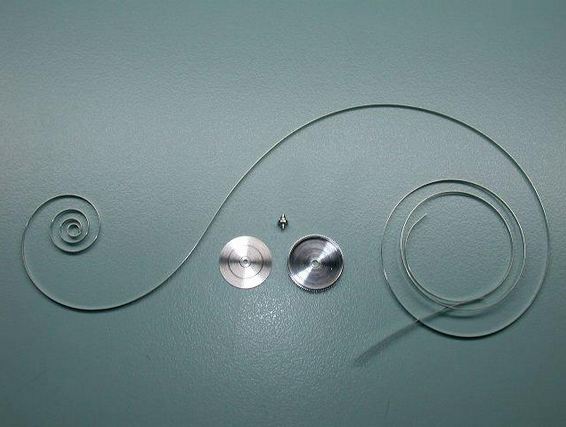 Picture 2 shows the barrel complete. Like the rest of the watch train, it utilizes micro gear toothing. Also known as ETA style teeth. This particular shape, invented by ETA, was chosen for both the wheels and pinion leaves, in order to improve the efficiency of energy transmission by keeping friction to a minimum. Most modern movements, regardless of the factory producing them, have switched over to these style of teeth. I think it was Curtis, after much research, who gave us a pretty accurate description of these teeth quite a while back. 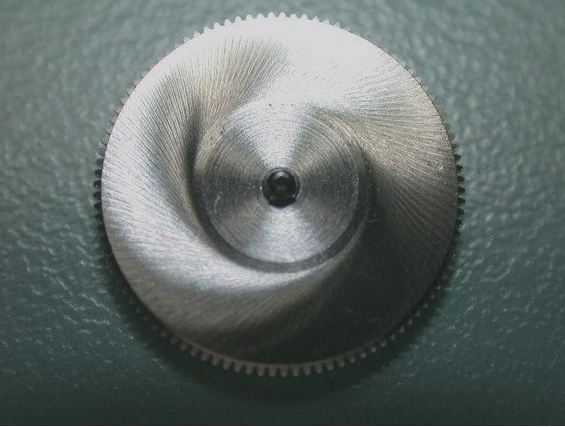 What amazes me as a watchmaker, is how well these teeth work. One can easily check this out by assembling the going train of any high grade watch that has the epicycloidal teeth. Without oiling any of the pivots, give the great wheel a push with a thin oiler. Now do the same with an ETA 2892, or even a Rolex 3135 for that matter. The wheels of the latter turn much more freely.

Picture 3 shows the complete train and the escapement. Nothing fancy there, just overall good basic engineering. Note that the wheels are made of glucydur and the pinion leaves are made of steel. Dissimilar metals rolling together produce considerably less friction than if they were made of identical material. All the wheels in quartz watches (high-grade ones included) are made of brass. Due to the fact that there is much less torque in a quartz movement, there is no need for the greater strength of the glucydur wheels.

The main plate, like almost all of the rest of the bridges and plates, is made of stamped brass. Most manufacturers rhodium plate these, both for aesthetic reasons, and for corrosion resistance. 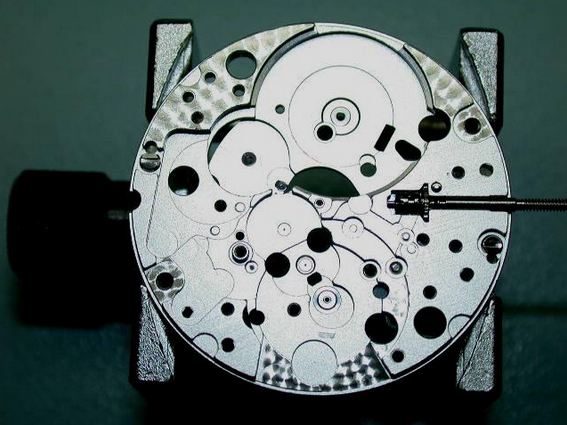 Here is the going train and barrel sans bridges. The brass colored wheel on the barrel is the ratchet wheel. 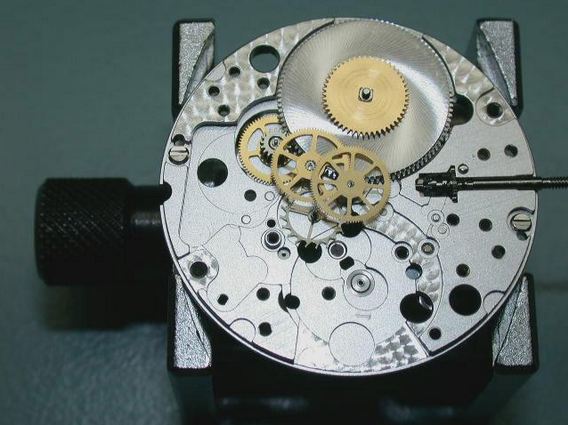 The inner workings of the wheels that fit under the barrel bridge. The ones on the left facilitate hand winding, while the one on the right, the ratchet driving wheel, is the final working wheel of the automatic unit. The spring, together with the smaller diameter steel wheel, serves a double-function. The part engaged with the brass colored wheel functions as a click, while the part resting on the steel wheel functions like a clutch.This forces the wheel to be engaged during hand winding, and allows it to slip and move out of the way when the auto-winding is engaged. The football (rugby for our European readers) shaped post that it turns on determines its free play in both directions. 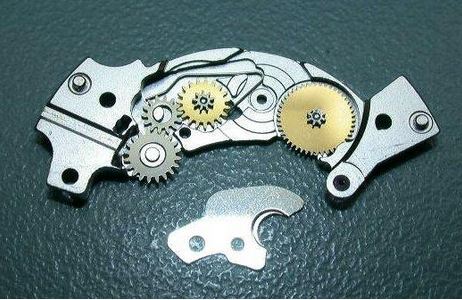 Picture 7 shows the barrel bridge fully assembled and ready to be installed. 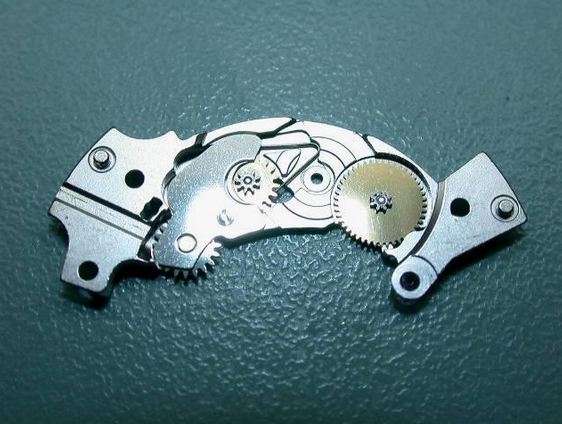 Here is the complete movement sans the balance wheel. 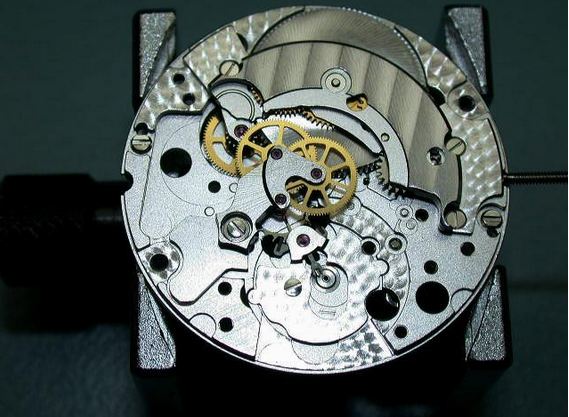 The 9mm diameter balance is a good compromise between weight and size. Both the ETA 7750 and Rolex 3135 have approximately 10mm balances. In ETA’s cheaper versions the balance is made of nickel. The ETA-Chron system makes centering the hairspring and adjusting the gap between the regulator pins very quick and easy. Unfortunately it also makes replacing the balance wheel complete quite a bit more difficult. The screw for fine regulation of the timekeeping, should not be used for more than a 5 second adjustment. Ideally it should be centered, as shown. 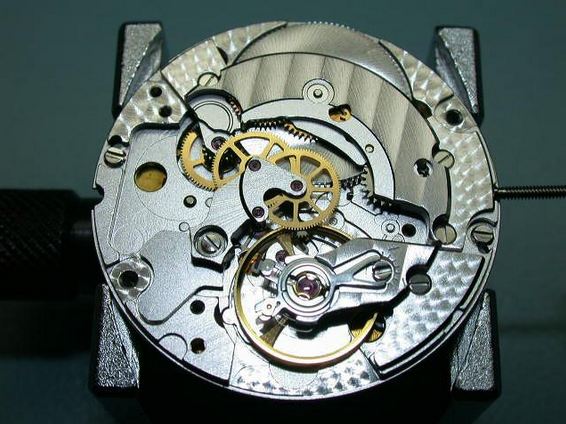 The dial side of the movement with stem, setting and winding system installed. 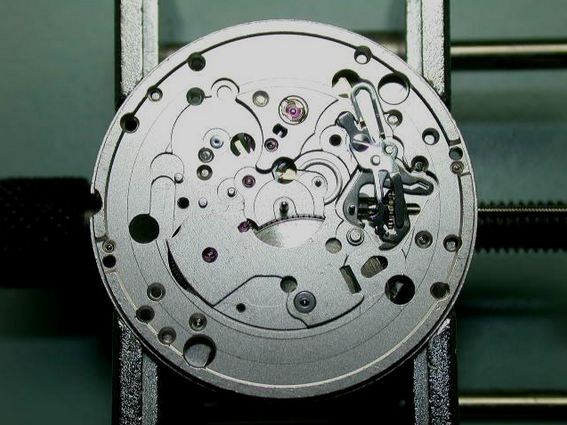 The complete dial side ready to be fitted with a dial.

The large brass wheel at the 11 O’ clock position is the calendar driving wheel. The brass tooth peeking out from under the steel wheel cover is the tooth that actually flips the date. This ingeniously simple design has been copied by many other manufacturers due to its simplicity, reliability and the fact that it gives a virtually instantaneous date change without needing extra parts. It’s also foolproof, such that one can change the time whether it’s engaged or not without damaging anything. 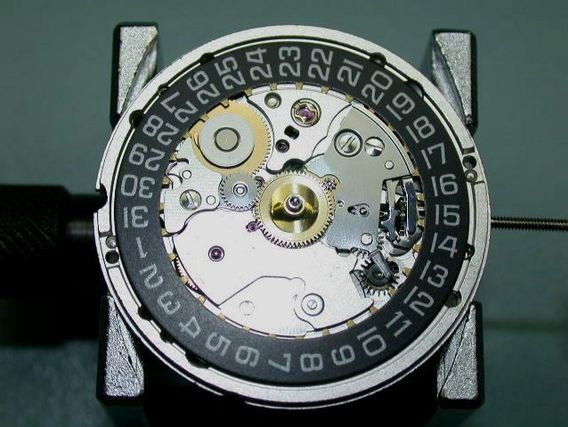 The wheel second from the right is the reversing wheel. This wheel, together with the middle wheel, facilitates winding in both directions. The first wheel on the left is the intermediate reduction wheel. One can clearly see the jewel that replaced the stud. It sits on the small stud fitted at the top 12 O’ clock position of the automatic winding bridge. 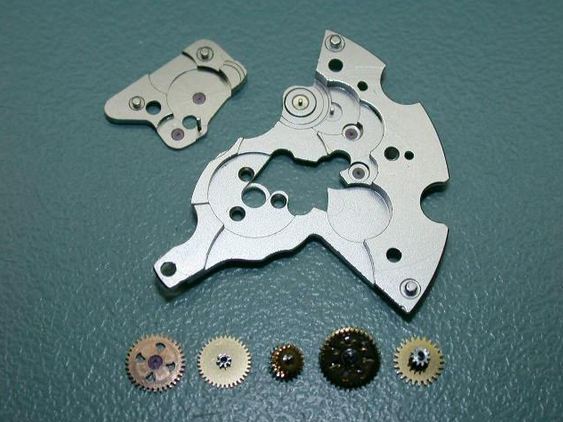 Here is the auto winding unit complete, ready to be installed in the movement.

With weight upside down one can clearly see the heavy weight riveted to its circumference. 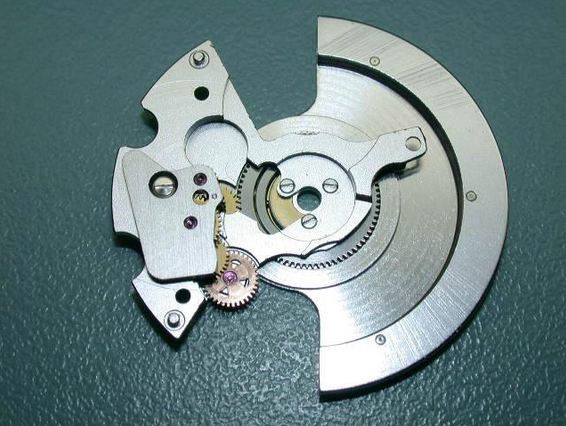 Voila!! The complete movement ready to be installed in the watch case. 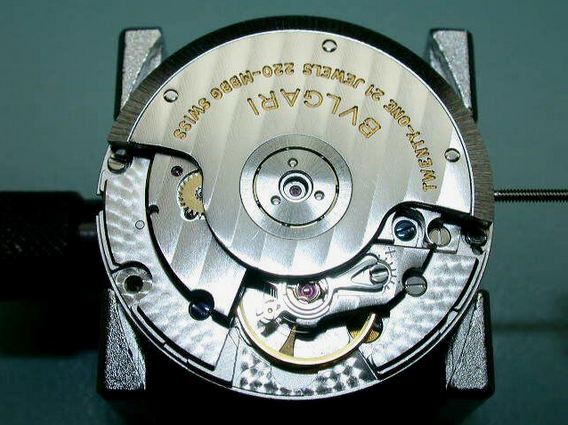 So what exactly is it that makes this movement so special? Or to rephrase the question, what made this movement is so accurate and reliable? Beats me if I know!! To be perfectly honest, I think that it is just a great design with compromises that have been intelligently chosen and superbly executed in its best incarnation. It incorporates all the latest knowledge and advances in both materials and movement design. It’s generous supply of available torque means that it will not be easily stopped, even when powering extra complications.

If I was given carte blanche, what would I do to improve this movement?

Firstly, I would make all the bridges out of Invar. This wouldn’t do anything for its accuracy, and probably as much for its reliability. But as a watchmaker it distresses me to see high end movements made out of brass. Brass is just so…… cheap. It also has a very poor co-efficiency of expansion. Invar has a virtually zero co-efficiency of expansion through a very wide temperature range. It’s also considerably stronger than brass. Being stainless obviously obviates the need to plate it too. How come Hamilton, Elgin et al produced zillions of inexpensive movements made of Invar or similar alloys, but Rolex, JLC, Patek Phillippe etc make their very expensive movements out of cheap brass??

Secondly, I would do a complete redesign of the automatic winding unit to improve its efficiency even further. I would eliminate the reversing wheel and incorporate a JLC style switching rocker, and I would further reduce the diameter of the ball bearing oscillating weight support. That’s one of the reasons for the Rolex’s winding efficiency, as the weight spins on a tiny diameter post. Unfortunately, they’ve taken winding efficiency to the extreme. The net result is that said tiny diameter post doesn’t offer enough support to the weight. This results in the weight scraping up against the movement bridges, even with mild shocks.

So how does it compare to the competition? There are some movements that match it in terms of accuracy and reliability, but in my humble opinion, none exceed it. The Rolex 3035 and 3135 match it toe to toe. But they are a lot thicker and considerably more expensive too. The PPs, while being very pretty to look at, do not match it for accuracy and are more delicate as far as reliability is concerned. Of course they’re also slightly thinner, so that does put them at a disadvantage. The JLC 889/2 does match it for accuracy, but is also too delicate to give it any competition in the reliability department. The main reason for the latter is it’s very weak mainspring. The whole design, while being well thought out and superbly executed, relies too much on everything being just perfect. It is thrown out of wack far too easily when even minor things go out of adjustment. I don’t have too much experience on the Blancpain/Piguet movements. But from the few that have crossed my bench, they don’t seem to deliver the same accuracy that the 2892 has no trouble delivering. Let me know if I’ve left any of your favorite movements out, and I’ll gladly comment on them.