The first watches were completed in January 1872. These models were made by D. G. Currier and J. K. Bigalow, and were 18 size, full plate, key wind. They were called the Stuart, Bunn, Miller,Currier, Hoyt and Mason. By the end of 1872, the corporation had sold approximately 10,000 watch movements.

In July 1877 the corporation was reorganized and changed its name to the Illinois Springfield Watch Company, Erastus Newton Bates served as President of the corporation.

The 18-size, 15-jewel, full plate, key wind, adjusted Millermovements were also advertised as having “a good reputation with Railroad Men”. All three grades were available adjusted to temperature and isochronism, with “adjusted” engraved on the balance bridge. 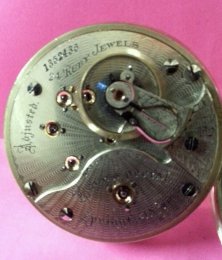 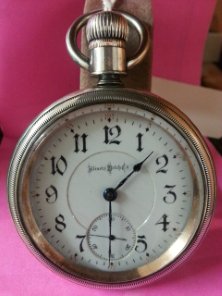 Illinois began producing the smaller 16-size watches suitable for railway service with the introduction of the 16-jewel grade No. 116 around 1888. The Sangamo became Illinois premier 16-size, 21-jewel, and 23-jewel grade movement around 1899, it was intended for the railroad market from its inception.

An advertisement in The Railway Conductor in 1903 stated the Sangamo watches “are good strong durable watches and are designed especially for railroad service where accurate time is an absolute necessity.” 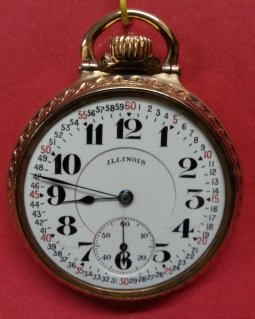 In the 1950’s, Hamilton offered a line of Illinois and Hamilton-Illinois wrist watches with Swiss movements. These have absolutely nothing in common with the watches produced by the original Illinois Watch Company except the name.

The use of the name “Elgin” in their brand names, or marking the cases with “Elgin USA” has often lead people to believe that a watch was made by the Elgin National Watch Company when it was actually made by another manufacturer, or to think that a watch no longer has its original case because it is “now in an Elgin case”.