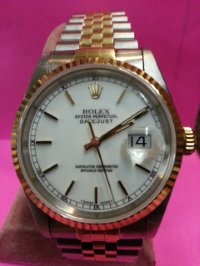 Rolex released the Jubilee Datejust (model 4467) in 1945, to mark the 40 year (or Jubilee) anniversary of the founding of Wilsdoif & Davis. Originally, Wilsdorf wanted to call it the Victory to celebrate the recent allied victory in WWII, but it was changed to the Jubilee at the last minute. Shortly thereafter the name “Jubilee” was dropped and the watch became simply known as the Datejust (although it didn’t appear on the dial until some years later). The Jubilee name was then attached to the watch’s bracelet, as it is known to this day.

The original Datejust was actually a version of the “Big Bubbleback” which Rolex had been developing since the early 1940’s. The new movement (caliber 740) featured two improvements: a sweep seconds hand, and a date wheel visible on the dial through an aperture at the 3.

Like the Bubbleback, these early models were referred to as Ovettone (Italian for “little egg”), due to the domed back, and show little similarity with today’s Datejust models. They featured a coin edge’ bezel (reminiscent to the Dennison cases used by Rolex in the 1920s), a date wheel which displayed alternating red and black numbers and a tiny bubble-back vintage crown.

Over the years, the Datejust has seen numerous changes including a larger crown and new fluted bezel. Probably the most notable addition was when Rolex introduced the cyclops magnifying bubble on the Datejust (model 6605) at the Basel fair in 1954. Subsequently, the cyclops was added to every watch in the Rolex line to feature a “date” wheel, with the ex-early DateJust (model 6105) Ovettone. Circa 1950’s of the Sea-Dweller and apparently was only optional on early model GMT-Masters.

In 1956, Rolex introduced a new Datejust (model 1625) known as the “Thunderbird.” Named after the U.S. Air Force aerobatics flying team, it featured a gold turnograph style bezel. Though a version of the watch is still available, it has enjoyed only limited success, even after numerous updates.

Initially, Rolex only offered the Datejust line in 1kt yellow gold, then around 1957 introduced it in stainless steel. By this time, examples in white gold and even platinum were in circulation, but only in very small quantities.

Around this time they also began to offer the Datejust with bracelet options: a Jubilee bracelet, Oyster bracelet or a leather strap. This coincided with the release of the day-date and with it the “changing of the guard,” as the day- date became the new flagship model.

Rolex was now relaxing their restrictions on the Datejust’s configuration and introduced the first stainless and gold (also called the ‘two-tone’ or ‘bicolor’) models by 1962.

In the late 1970’s, Rolex introduced two new improvements to the line. First was the “Quick Set” feature, which allowed the date function to be set quickly (via the winding stem), without having to advance the hour hand past the midnight position. By 1983, all Rolex models were fitted with this feature.

At this same time, Rolex began outfitting their watches with the new sapphire crystal. This improvement aided in the appearance, as well as the durability of the watch. This new crystal had a slimmer profile, yet was more waterproof and scratch resistant.

When Rolex completed these improvements, they began designating the watches with a new ease reference number featuring five-digits, replacing the old four-digit number.

In addition to the Datejust, Rolex introduced the Oyster-date in the early l950s. This watch is very similar to the Datejust, its case being just 2mm smaller. Rolex has also offered the Datejust in a mid-size which is 80% the size of the standard Datejust.