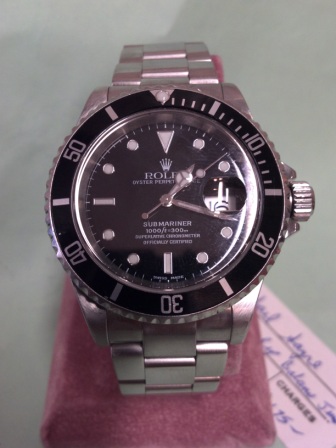 Over the years, Rolex has become famous for “over-engineering” their watches. They’ve exposed them to the most outrageous of conditions, dating back to the first Oyster which braved the English Channel, the Explorer conquered Mt. Everest and the Milgauss warded off massive electromagnetic fields. Rolex watches have broken the sound barrier and even experienced the zero-gravity of space, but these grueling tests pale in comparison to those the Submariner has faced.

On September 30, 1953, Rolex took the term “torture tests” to a new level, when a Rolex experimental watch simply known as “Deep Sea Special” was successfully tested to a depth of 10,336 feet (3,150 meters). The watch was attached to the outside of Piccard’s famed bathyscaphe FNRS-2, during the world depth record-setting voyage. It is worth noting that only seven of these experimental watches were made, #5 sold in June 2000, at Christie’s in London for £75,250/$112,500.

If this wasn’t enough, Rolex pushed the envelope even further on January 23, 1960, with another experimental watch, now more fittingly named the Piccard (model 7205/0). This watch accompanied Piccard’s new bathyscaphe, the Trieste, on its journey to the deepest ocean floor in the world. It dove to the Marianas Trench at 35,798 feet (11,000 meters) — at this depth, the watch successfully withstood pressures of over seven tons per square inch!

There has been some discussion as to which, was in fact, the first Rolex diving watch. The short list includes the 6200, 6204 and 6205 models, respectively.

Unlike current Submariner models, which are divided into two versions, date and non-date, the Submariners of the 1950’s were divided into different depth ratings — many available in the Rolex catalog concurrently. This was due to the fact that in the 1950’s, not every recreational diver needed a watch with a depth rating of 600+ feet. Therefore, Rolex offered different models, with different depth ratings, at different price points. Today however, all current Submariners are rated to 1,000 feet, whether it be the date, or non-date model — if one requires a deeper rated watch, they can simply opt for the Sea-Dweller with a 4,000 feet rating.

It is worth noting that Rolex model numbers (for the most part) ran in chronological order, therefore it is logical to assume that the 6200 would have preceded the 6204, and 6205, respectively. With that being said, it is believed by some that the first Rolex diving watch was the model 6200, released in 1953, and powered by the A.296 movement 37. Early versions were fitted with a bi-directional bezel (with rounded numbers at the ten minute marks), and featured a dial strikingly similar to the Explorer prototypes (with numerals at the 3-6-9), which were also released in 1953. The case was thick and the winding crown oversized, bearing the mark Brevet (from the French word brevette meaning patented) under the coronet, and with it a depth rating of 660 feet Brevet crown (200 meters).

However, at this time neither the depth rating, nor the name Submariner were printed anywhere on the watch. It is also important to note that all of the early models (until around 1955) were fitted with pencil-shaped stick hands and featured a second hand with a small luminous circle on the tip.

The 6204 was officially launched as the first Submariner at the Basel Spring Watch Fair in 1954. Although, it is believed to have actually been released shortly after the 6200, in late 1953. The earliest versions (produced in 1953), were rated to 330 feet (100 meters), but by the time it was launched at Basel it had been upped to 600 feet (180 meters). This was the first version to bear the name Submariner on the dial (in very small print), positioned above the 6. However, many examples have surfaced where the name Submariner had been “obscured by black paint.”

The reason for this is unknown, but it has been suggested that there may have been a legal issue, concerning the use of the name Submariner, that had yet to be resolved. This theory is further supported by the fact that Rolex patented a number of model names from 1953 to 1954 which could have been used in lieu of Submariner.

Those names included the following:

It is worth noting that the name “Submariner’ was not officially patented by Rolex until around 1960. Also in 1954, Rolex released the 6205, which was almost identical to the 6204. Both watches were fitted with the A.260 movement, which was an improved version of the A.296 fitted to the 6200. They also shared a new dial, which closely resembles the style we arc accustomed to today — round hour markers, with rectangles at the 3-6-9. One distinguishable difference was that the 6205 was only rated to 330 feet (100 meters), although it was not printed on the dial until around 1955.

By 1956, the Submariner bezel was redesigned, now featuring individual minute marks — to the first fifteen minutes. Soon thereafter, the triangle positioned on the bezel was painted red, and the watches’ cases were being made thicker — similar to the 6200 model. The larger Brevet crown was being widely used as well. Also in 1956, the 6536 became available as the 6536/1, which featured a chronometer version of the 1030 movement.

By the late 1950’s, the bezel was again redesigned, now featuring the squared font numbers we know today, and the triangle was no longer painted red. Also around this time, the word Brevet was removed from the winding crown, now simply featuring the Rolex coronet.

In 1959, Rolex launched the 5512, which was fitted with the 1570 movement and the first model to feature the crown guard-these earliest versions of the crown guards had square profiled ends. By the early 1960’s, the 5512 was fitted with the 1560 movement, and with it bore the words Officially certified Chronometer on the dial, positioned above the 6. Around this time. the crown guards had a more pointed appearance at the ends, but by the mid 1960’s their appearance shifted to the more rounded profile, as they are today.

In 1962, the model 5513 was launched, powered by a non-chronometer 1530 movement, but was fitted with the 1520 movement by the mid 1960’s. Around this same time, Rolex changed the wording at the bottom of the dial from Swiss to Swiss T<25, signifying the switch from Radium to Tritium as the luminous material used on the dial and hands. Some models in the early 1960’s will bear Swiss, with T<25 positioned on either side. This was due to the T<25 being added to the existing stock of dials that were already printed.

In 1966, Rolex launched the 1680 model, powered by the 1575 movement, and with it the first dale feature on a Submariner. To allow the cyclops magnifying bubble to be positioned over the date aperture, the crystal was given a thick, yet flat profile (as opposed to the bubbled shape on other models). The name Submariner was printed in red on the 1680 model as late as 1980, however, the white printed name began phasing back in as early as 1974.

By the early 1970’s, the winding crown now bore the current Triplock markings — three dots positioned under the coronet.

In the early 1980’s, the 1680 was renumbered as the 16800, and was now fitted with a scratch-resistant synthetic sapphire crystal, giving it a much slimmer profile—the depth rating was now increased to 1,000 feet (300 meters). Also in the 1980’s, Rolex added a new safety feature to the rotating bezel. Prior to this time, the bezel was able to turn both clockwise and counterclockwise. Now, the bezel was restricted to turning only counterclockwise. This was done to prevent the accidental movement of the bezel while diving, thus giving the erroneous indication Triplock crown. of less time spent at depth. This could cause the diver to incorrectly pace his ascent, and therefore increase his chances of developing DCI (decompression illness), a potentially deadly condition often referred to as “the bends.”

In 1968, a special version of the 5513 was issued to the British Royal Navy. This watch was fitted with a large diamond-shaped hour hand, with a similar shape on the tip of the second hand. Another distinguishing feature, was the letter “T” within a circle, printed above the Submariner name, which was positioned above the 6. This is said to signify the use of Tritium as the luminous material on the dial and hands. (Please Note. These watches also featured T<25 at the bottom of the dial, signifying the luminous material as well.)

In 1972, Rolex created the 5517, specifically designed for the British Royal Marines. This watch looked nearly identical to the 5513 listed above, with the exception of the bezel, which featured individual minute marking all the way around—not just to the first fifteen minutes.

The three later watches (6538, 5513 and 5517) had the strap bars soldered in place, allowing the watch to be fitted with a military style cloth strap, exclusively. It is also said that these watches feature “identifying service numbers” engraved on the case backs.

It is impossible to discuss the Submariner without a mention of James Bond, since the watch was featured in a number of the movies. None was more memorable than the Submariner, which featured a bezel, spinning like a saw-blade allowing 007 to cut free the ropes binding his hands.

The success of the Submariner, has at least been credited to its presence in these spy films.

Crown Position: 1 (for most models)

The crown is screwed down fully. in this position, the watch is completely sealed and is ready to be worn.

Pull the crown out (fully) to the last notch. In this position, the watch will stop. From here the time (hours and minutes) can be set. Notice the seconds will stop (or hack) allowing the time to be synchronized with another source, By pushing the crown back in (to position 3) will restart the watch.